Distinguished international contemporary artist Xue Song is not only one of the iconic figures of contemporary pop art in China but also the earliest resident artist of Moganshan Art District in Shanghai. His meticulousness and insistence in pursuing a specific style makes him an important personage in the Neo-Shanghai school of art in China. CASABELLA is honored to invite renowned international contemporary artist Xue Song to create the artwork “Landscape – Cola”, where Chinese landscape painting is presented on the Coca-Cola bottle by paving Swarovski crystals. The fusion of Eastern and Western cultural elements is used to portray the brand new image of Coca-Cola through deconstruction and reconstruction.

Coca-Cola is the most emblematic foreign merchandize amid the backdrop of globalization; its foreign cultural symbol is matched with the traditional landscape of Chinese local culture. The marriage exemplifies a fusion of harmony and conflict, solemnness and mockery as well as somberness and irony. Such combination generates a powerful visual impact. Within the profound Chinese culture, the new image of Coca-Cola encompasses, deconstructs and stimulates new visual vigor.

The cast mold is polished by hand in preparation for the setting procedure. If the result is not satisfactory, the settings will be polished again depending on the situation at hand.

Each crystal requires its own setting, which is tapped one at a time by hand. The size of each setting is determined through precise calculation, therefore the drill bit must be changed frequently.

In order to present the lines of the landscape painting flawlessly, Xue Song has employed his proprietary pearl paint, which must be carefully formulated using measuring cup and electronic scale.

Each sparkling crystal is paved individually by hand. In total, more than 80,000 Swarovski crystals were utilized for “Landscape – Cola”.

Born in Anhui, China in 1965, Xue Song now resides in Shanghai, and he is one of the most important artists in Chinese avant-garde Chinese art as well as an iconic figure of contemporary pop art in China. Xue Song’s works are always endowed with a critique of inherent introspection and self-insight and he is also the earliest resident artist of Moganshan Art District in Shanghai. Moreover, he is considered an influential personage in the Neo-Shanghai school of art in China. Xue Song’s creations date back to the 80s, where his repugnance towards traditional painting propelled him to search for an expression technique with greater freedom.

From a cultural point of view, Xue Song’s creations are always endowed with a critique of inherent introspection and self-insight, and they often experience the process of “regeneration” as they are liberated form their existing meaning to reflect the idea of seeking innovation within tradition. By combining historic recollection, contemporary reality, traditional culture and modern perspective, he has endowed the artworks with new understanding, in turn sparking interactions with the audience. From material selection, firing to the intricate handcrafting process, they serve to liberate an object from its existing form and meaning. Painting is his interpretation of such philosophy and it bears an inexplicit connection to the former.

As far as creative technique is concerned, Xue Song’s works often feature rich, complex backgrounds collaged from small pieces of burnt pictures. The charred pictures are obtained from various magazines or books, and the foreground usually consists of a picture that occupies the entire frame such as great historic figures, newspaper photographs or Chinese landscape painting etc. Xue Song selects the most common and widely recognized images so they are readily recognizable by the audience. The pictures were once shared, owned and used repeatedly by many people, therefore they require no further elaboration. Xue Song processes these images in his unique approach so that their original symbolic meaning is relativized to produce new meaning. Consequently, art critics have dubbed him the contemporary pop artist with the most profound Chinese cultural demeanor. 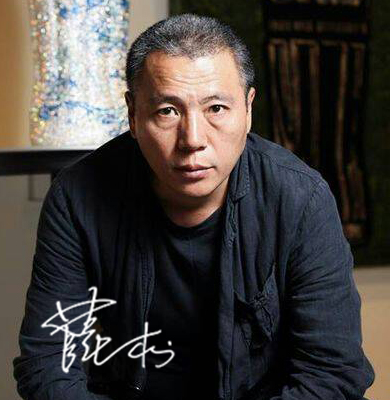